Afterwards - A Story Of Love

After creating the initial work with this woman, I came up with a story to the picture. As it’s been said, every picture tells a story. That’s true in my life. I can walk the street and see an advertisement and immediately I have a story for it. So it is also with this lady. I got her a story. Please bear with me as I share it. 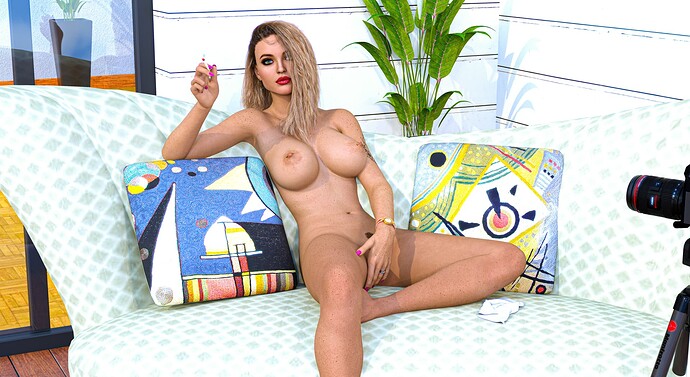 I met Ruby one evening, when my work-mate invited me over to his condo for a beer. I was floored when I saw her. Literally stunned and mesmerized, the moment I set my eyes on her. Had to look the other way not to expose my intense fascination for this staggering beautiful and witty young woman. No doubt, Jay couldn’t hide his pride having made such an amazing catch as her. I truly envied him there and then. To make matters even worse she acted as if she wasn’t aware of her amazing looks. She just acted cool, fully natural and laid back, far from the women I’ve met earlier in life. They had either to look in the mirror every ten minutes or take a selfie with pouting lips.

Ruby was instantly the center of the party that night. I almost laughed my head off at the anecdotes and hilarious jokes she told. All this had me a bit more relaxed than at the beginning when we met. Ruby possessed the unusual trait of having both outer an inner beauty. After that night the three of us spent a lot of time together. Did the town and even went on holidays together. We felt almost like siblings, sharing things and thoughts without any fear. Like two peas in a pod.

After the initial shock had subsided, I found Ruby to be more of a friend than I’d ever had. If I ran out of cash, or had forgotten my wallet at home, she paid for whatever I had bought. This without as much as blinking her eye.

– You can pay me back later, she always said, smiling widely.

These moments I strongly and defiantly had to keep myself from not kissing her. when gazing into those blue eyes of hers, I almost felt like I was swimming in a lagoon. They were almost hypnotizing.

Never knew if she noticed my clandestine fascination. I’m sure women has that kind of sixth sense or “radar”. They can tell if a man is interested from miles away. So, I guess to her it was obvious from the start, but she kept on playing oblivious. I noticed though that Ruby looked at me kind of different, a bit longere every time as if she was studying me a bit deeper than before.

Being a man of honor, I never made any sexual hinting or flirted with her. Jay was my best friend and I really wanted that relation to last. It was obvious what a head turner Ruby was, as we were walking down the main street up town. Every man that passed us couldn’t take their eyes off of her. They were almost drooling by the sight of a true American beauty. One man walked right into a lamp post after seeing her. I’ve never seen Ruby laugh that hard before. Tears were running from her eyes with laughter.

Anyway, one day I was minding my business. I was on my way to my car at the parking lot by the supermarket, when I bumped into Ruby. We played our parts in the forced charade by the morals the both of us still obeyed. Did our customary gestures and shared equally kind phrases and well meant smiles. That same play I know we both hated so deep inside.

Anyway, I noticed her eyes didn’t have that glimmer and shine I’d become so accustomed seeing. Still she could muster a slight smile at me, showing that set of of pearly white teeth, I so admired. That glossy, ruby red lipstick she loved.

– Pardon me now, Ruby, don’t want to snoop or pry around or so, but I can tell something’s weighing down on you.

Immediately I could see her eyes watering. She bent her head and started weeping. Her whole body was shaking as she wept.

– It’s dad… during a routine visit to the doctor, they discovered he has cancer and that it’s at the last stages. There’s nothing they can do. It’s too late for chemo-therapy. Had he come just a month before, they could’ve cured him. I’m completely devastated. More than anything else, I’m a die-hard Daddy’s Girl. He’s my first love and will stay so forever.

I asked if I could be of any help in that tragic moment of circumstance. She didn’t answer, or couldn’t, since she was all shaking with tears. She just put her arms around my waist and gave me the hardest and most sincere hug I’ve ever been given by her. My shirt was soon all soaking wet by her tears. After a while, she asked with a hoarse and cracked voice if she could come to my place. Jay was away for at least two weeks, helping his father in the family’s farm. After all we were true friends, so of course I invited her home. This couldn’t keep my pulse from reaching before unknown heights.

In all honesty I dare to say that none of us could’ve had any kind of sexual expectations or double agendas for that night. All I wanted to do, was to comfort her and try to mend a broken heart. At least I could do the best I could. This was also meant as a gesture to my true friend, Jay.

I poured a glass of Rum and Coke for her. Knew she favored it from earlier occasions. To my great amazement, she downed it straight away and immediately asking for yet another one. Then another and another. Soon she became quite tipsy and relaxed. She stretched her arms up, revealing a set of full-grown and juicy female breasts. The same ones I hadn’t even had the courage to study more thoroughly. Not more, than just a quick peek, when I thought she looked the other way. Anyway, they almost proclaimed heavenly pleasures, if only touched. They bumped and bounced around her chest as she waved her arms, while making gestures. Her mouth was bubbling with words. Obviously it’d been a long time since she could get the load off her chest. It had me thinking about if she and Jay really and openly could address issues like this one together.

Soon she began weeping again. This time she almost lost her breath with tears. She gasped, trying to recover. Again she dried her tears on my already soaking wet shirt. Then she paused. Our eyes met.

I can swear on anything that It was a moment where time must’ve stood still. Suddenly I felt her lips pressing against mine. At first just lightly but after a while the more intense and demanding. She ran her fingers through my hair and caressed my cheek. Her breathing became more intense until she was panting.

Before the both of us knew it, she was unbuttoning my shirt while I was tugging at the hem of her blouse. Soon we sat there with bare torsos. I almost tore her bra off her in pure and intense arousal. There we were, doing what we within ourselves silently had vowed never would happen. The Trespassing, the absolute forbidden. I was breaking my best friend’s trust at the same time as she was about to cheat on him. But I just couldn’t resist Ruby any longer. That little futile remnant of resistance just faltered away by the intense force of pure and primitive desire. That inner drive of ancient lust and sexual desires. The same that had helped man to survive through time. There it was, banging on our doors. You could almost hear it shouting - Let me in or I’ll break the door!

That night we made love like I’ve never experienced it before. Ruby was all over me like a wildfire. She neither gave me room even to breathe nor to pause. It was like she was regaining earlier lost opportunities. Had she harbored the same feelings that I been having for her? That same primitive, fleshly desire? I never got to know. At least that night. Later she confessed the she’d felt deeply attracted by me from the very first beginning.

We climbed way high up to the last rungs on the love ladder. We left no stone unturned in our quest for perfect love and sex. Neither of us thought it was possible the way we felt for each other. It was surreal. During this time I truly learned to know Ruby. When we talked, the subject almost always ended in us talking about - sex, sex and sex.

Jay, being fifteen years senior to Ruby had its implications, despite both of them saying that the age difference wouldn’t matter. After a couple of years it dawned on Ruby that in fact it did. Their love life was lesser and lesser as time went by. As it did so, Ruby became more and more annoyed and frustrated. As I only was four years senior to her, I could keep up with her pace and hunger when it came to sex. She had a super vivid imagination when it came to it and wanted to try as much as possible. I enjoyed it to the fullest. I was literally in Paradise. Bathing in pure love, soaked with it.

Finally, after months of sneaking around, we had to tell Jay. I felt miserable, but at the same time adamant. I wanted Ruby in my life - permanently. Hell and wild horses couldn’t keep me from her. Surprisingly to the both of us, Jay took it with calm. He said that he’d figured it out the last couple of months. All the overtime Ruby had to work. All the grieving friends she had to comfort and sleepover at. He expressed gratitude for the fact that we finally had the courage to come forth and finally tell him the truth.

Me and Ruby are still together and to tell you the truth things couldn’t be better. I’m gonna’ marry that girl.