If you’re looking for an alternative to Facebook, I can highly recommend a place. 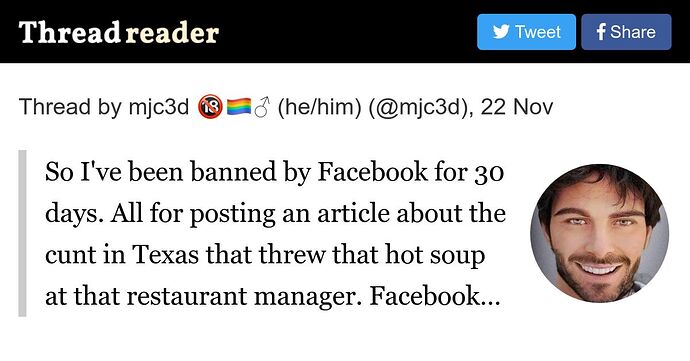 Thread by @mjc3d: So I've been banned by Facebook for 30 days. All for posting an article about the cunt in Texas that threw that hot soup at that restaurant manager. Facebook says it's only for 7 but...…

I have reservations about Ello.

I joined back when it first launched, when they essentially pitched it as a Facebook killer. It went the usual way: a bunch of the usual early adopters signed up, made two or three posts, then forgot about it.

When it became clear that the whole thing was basically dying, the founders relaunched it as “the artist’s network”. When they did that, they added a whole bunch of their favored artists to everyone’s follow lists, so I suddenly started getting spammed with email notifications about new posts from people I’d never heard of. I had to go in and unfollow all the people that they’d decided I ought to be following, which took a while.

Now, I only think about Ello once every couple of months, whenever a Russian dating site spammer follows me or likes one of my two posts. I log in to see who my new follower is, and it’s always someone with a random ‘artistic’ icon and a profile that consists of nothing but a redirector link to a site named datehotwives.ru or something similar. And I block them and report them, and then don’t think about Ello again until the next spammer comes along. Which they always do.

I have to admire the kind of grim optimism that goes into trying to spam people on Ello. It must be like being a door-to-door salesman in a ghost town.

What I’m saying is that Ello is dying. It’s always been dying, and I’m a little amazed that it is still dying but not actually dead. Maybe it’ll just keep dying forever (“That is not dead which can eternal lie. And with strange aeons even death may die.”). But I’d be wary of investing too much effort trying to build a community there, because I have no idea what their business model is or when someone is going to finally pull the plug.

An alternative option could be Mastodon. It’s more Twitter- than Facebook-like, but it’s distributed/federated so as long as you can find someone who’s willing to pay the $10/month that it costs for a VM that can run the software, there’ll always be a Mastodon instance somewhere. Of course, individual nodes may or may not survive. I’d argue that mastodon.social has the best chance of clinging on, but it’s not guaranteed. I guess if you’ve got $120/year to burn, you could stand up your own node and keep it going as long as you like.

Well, a community whether it is online or offline is whatever the members make of it.

I have serious issues with mastodon, and I say this as someone very much a part of the LGBTQ community. Mastodon is quite toxic and bigoted towards anybody that is cisgendered whether they are LGBTQ or not.

There’s Mastodon the network and Mastodon the technology. I’ve heard similar criticisms of the network. The ones I heard were actually from female or LGBTQ users who complained about the absolute lack of any protection against the kind of vileness that seem to be endemic on social media. I think the developers and admins gave them the usual “Yeah, well, absolute freedom of speech is a feature, not a bug” response, which went over about as well as you’d expect. So, yes, not good on that front.

The technology is, I guess, what you make of it. You can run non-federated instances (i.e. instead of sharing content with the entire network, you limit what people can see and share to just stuff that originates on your instance) and do the work needed to weed out toxicity. It would be a reasonable solution to the issue of setting up your own by-invitation-only social platform, if you wanted to go that route. But administering any community is a commitment, so it’s not a magic bullet, and you might find a closed community too limiting.

Ello certainly looks good as a ready-made platform but, as I say, I don’t know how long it’ll be before it goes the way of Geocities. There’s also Artfol, another network aimed at artists (it also allows NSFW postings), which might be worth a look. Their funding model is a little vague too, though: it seems to be mostly by-donation, which is nice but makes me wonder how long they’ll be able to keep the lights on.

I used to run a couple of federated sites with Mastodon and Pleroma. I prefer Pleroma but mainly because I hate Ruby on Rails.

One of the things I’m working on right now is to launch The Purple Sphere more geared towards artists and the like too. Just nowhere near ready. (Working on the legal framework right now) and haven’t decided whether it will be another Pleroma instance or whether Mastodon the software has advanced enough to make me want to deal with Ruby. LOL