Weird problem. I noticed some weird G8F deformities in a scene I was working on so I loaded G8F and G8M both up in a scene. There is some serious thigh and hip-level deformities going on with G8F! 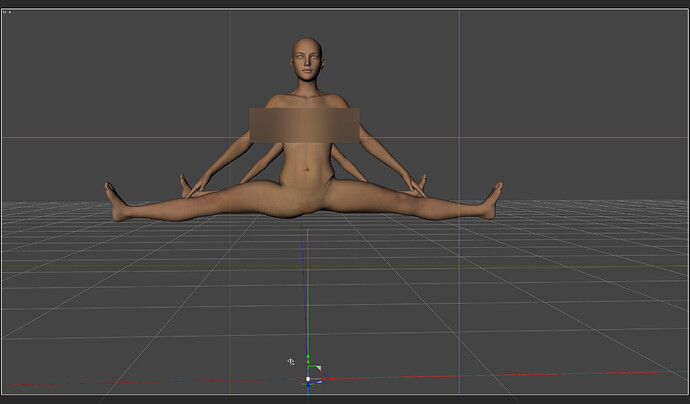 And this is from my DAZ Content Library! I thought it might have been an issue with one of my 3rd party installs. Well I removed my Third-Party Content Library from my Content Directory Manager and am still seeing the issue.

I guess now I need to try to figure out what is causing this.

At this rate DAZ 3D QA is about on-par with RenderHub’s! (As in … there ain’t none!)

Well, I’ve narrowed it down at least to 1 of about 280 different products that I’ve uninstalled. LOL!

I think it might be the SWOLE morphs. Frankly I don’t even know why I have them. I never use them for anything. Reinstalling a bunch of products and am then going to install some suspects one at a time before I start moving to reinstalling small batches of 10 at a time.

Going to try to install Ms. SWOLE next.

Only 7 left! I wonder which one it could be?

If you have Anja HD from Gravity Studios you probably want to uninstall this character at least until DAZ releases a fix (unlikely).

Try loading G8F base and then look in the parameters where it’s something like “currently used” - with hidden stuff turned on. There may be something there that is loading when it shouldn’t. Often a borked G8 base can do it too - you could try uninstalling and reinstalling? Although don’t quote me, but i THINK i have a vague memory of the SWOLE morphs doing something…

Which is why I resorted to uninstalling 100 packages at a time and then going in and re-loading G8F and then checking.

And after 480 packages (and right when I bumped the number of packages I uninstalled up to 200(!)) the deformities were gone.

So now I’m re-installing stuff in 25 package increments until I find the fucker.

I think it is the Ms. SWOLE package. Not even sure why I have that. I don’t render bodybuilders.

My other suspects are Bend Control for Genesis 8 Female.

But I know it’s not hair or outfits so reinstalling all of that first. That should speed things up.

Then reinstall the poses.

Then finally the characters. 10 at a time.

The culprit is Anja HD from Gravity Studios!

So I found the product causing the G8F deformations. It’s Anja HD from Gravity Studios.

Uninstall this product if you have it!!!

Glad you found the problem! That’s a DAZ product - definitely send in a support ticket with screenshots etc so they can get the PA to fix that. I bet others are having the same problem as you and probably have no idea what is causing it.

do you have Ultimate zero? When I bought that for posing, it let me know that I had hidden crud dialing in with my figures. Including a fred winkler character that was dialing in, despite not being visible in hidden morphs. Very strange.

Yeah me too. I bought ultimate zero and it didn’t work for what I wanted to use it for, but it did reveal that certain content was in use invisibly, and offers to zero it out, glad you figured out which figure was causing it for you.