Since it’s looking increasingly likely that DAZ will release Genesis 9 next week I thought I’d create a discussion thread where we can discuss all the things that DAZ won’t allow on their own forums.

Probably going to hold off on “upgrading” until there’s some decent content. G8 and G3 work just fine for my needs.

But if they release a new version of Studio that doesn’t load all the damn morphs when you load a figure would be an absolute game changer too. TurboLoader works but it’s kludgy at best.

Yeah I am also 99 percent sure that is what this major announcement is. I really wish it was an update to their software. While it does what it’s intended to do, it’s completely annoying the workarounds people have to go through for certain things to work, or to work well. It’s almost to many things to mention to even get started really.

Biggest thing I am looking for is probably not going to happen. Genitals for the male character especially should be a requirement as it is beyond baffling to me that they allow so many to go without them, causing either missed sales, or people using third party items to compensate for the lack of them.

I am also unsure as to why these companies continue to push their software as “whole” experiences and yet the company itself does not provide enough information on how certain aspects work in the software alone. Sure some new features get tutorials but the vast majority of stuff is either missing FAQ pages or just aren’t discussed. Honestly a person shouldn’t have to go to other sources to consistently figure out how things work within the program itself.

I love DAZ studio for what it is. I like creating my artwork in it. But I truly think they just shoot themself in the foot with their thought process behind stuff. Newer, newer, newer isn’t necessarily the best option for a company. They may see it as a cash cow, but if your base software that utilizes these “new” items isn’t solid or doesn’t have a real support system behind it, it’s never going to truly be seen as anything worthwhile in the market. 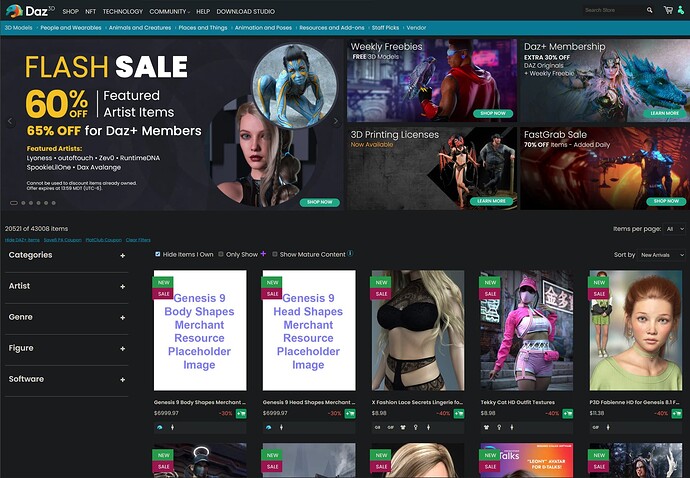 For the love of all that is holy. They had another one from a week or so ago that was some clothing that showed up in a google search and was actually listed and then quickly taken down. They are horrible at keeping this shit under lock and key.

Well I have not been more underwhelmed about a new character release than I find myself today.