Forgive the DA link: too big to post here: 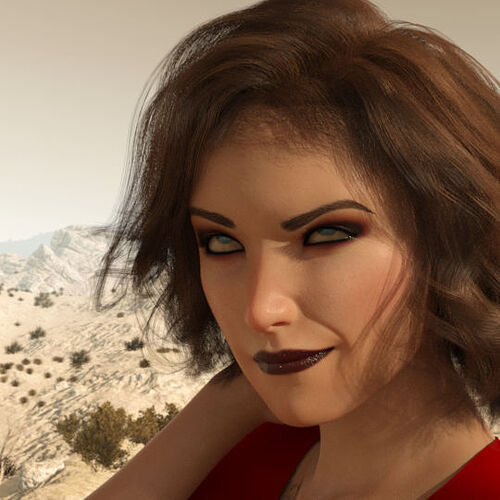 Glance by Pantros on DeviantArt

Wow! That’s pretty awesome! How long did it take to render? And is that Iray or Filament?

(Also - no apologies to linking to DA or any other site!)

Adobe Premiere Elements to put them together. (and add the signature block)

If I remake it at a larger resolution, I’m adding a tiny bit of glossiness to the skin.

I am redoing this at 1080 for several reasons: –Get rid of the black wings –I don’t like the skin, it’s too matte. –Though I tried it with emissive lighting, I couldn’t get the background to look right, so I stuck with HDRI since it’s outdoors. I did pick one with better light, though. Since I’m rendering at 1080 instead if 540, its 4x the render time, so at two hours in, I’m 50/150 frames done. Preview Image: 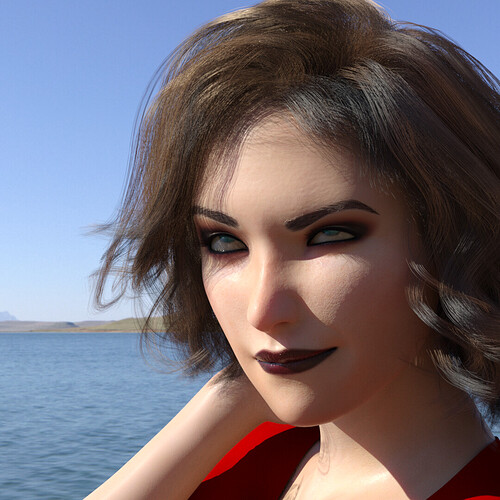 Well, that frame looks fantastic! Topaz Labs has some plugins for Premier that does some pretty decent video upsampling. May be worth looking into?

It really does look great. I’ve tried my hand and a couple of small animations, but my god the amount of time it takes for me I am just not sure it’s worth it lol. I would have to get separate systems just to try and run something like that. 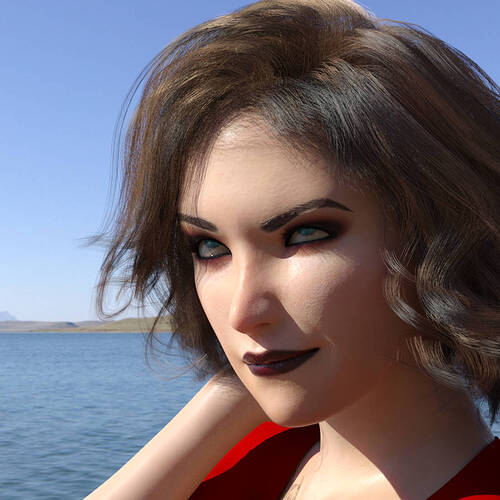 Glance1080 by Pantros on DeviantArt

This was easy to make.

I started by picking a model and an ending pose and expression. I created a camera, set the view to where I wanted it, and locked every parameter of the camera. XYZ, XYZ rotation, scale and XYZ scale all locked.

The trickiest part is here: I added a null object and a tiny primitive sphere. I parented the sphere to the null and moved the sphere to -5000 on the X axis. I set the sphere’s Y parameter to be identical to the Y parameter of the camera. Then I selected the eyes and had them point at the sphere. Then I rotate the NULL to 90 degrees and the eyes seem to be looking at the camera, only the sphere is far enough back that the eyes don’t go crosseyed.

I expanded my timeline to 150 frames and set the cursor to the last frame. I made sure the model was selected and added a keyframe. I added another keyframe at 90 frames in - same pose. I added the same keyframes to the null. Then I went back to the start of the timeline and altered my pose to be looking away. (the starting frame is automatically a key frame, but I made sure it was.) I changed the expression to something more neutral. I rotated the null so the eyes worked with the starting pose and made sure there was a keyframe on the null at frame 0. At this point I have a starting pose, eyes that turn to look at the camera, a change in pose to look at the camera and as change in expression. All the motion starts at 0 and ends at 90 then stays static through 149. Now I go in and just add another expression around frame 50 I add some eye blinks (Eyes Closed pose control, but not all the way - that never looks right) and between frames 90 and 150 I make some very small parameter changes to the pose controls at a few spread out frames between 100 and 140. This keeps the motion from being too smooth and adds a touch of realism.

Light it - in both of these cases they’re HDRI lit to keep the lighting in the background in sync with the model.

SAVE here and exit Daz if you want.

Load the images into Adope Premiere - 1 frame per image - add a watermark/signature layer and export as an animated gif.

Good job! I’ve done a bit of editing in Premier and After Effects Those took a while before using a good PC. Now that I’ve got a good one it’s a tough sell for me to tie up my PC for that long even with what I have.