A Collection of Opinions and Observations from the DAZ 3D Marketplace.

Get up to $60 worth of Select Special Daz Items for FREE Get one Genesis 2 or Genesis 3 Pro Bundle FREE PC+ Members get Select Items for $2.10 each

New giant from Sixus1 is so detailed and realistic looking. Giants are often misunderstood creatures. They can’t help it if they have a glandular problem.

This chainmail Knight’s armor will protect your Dirk the Daring character as he attempts to rescue the Princess Daphne from the clutches of an evil dragon.

Short curly hair wig for male and female characters is rigged for dForce and doesn’t look half bad on a guy for a change.

This is a collection of 6 fantasy weapons.

Disco is not dead for your dynomite dudes wearing these dforce duds.

A set of five additional materials for the Disco Boogie Outfit.

A set of six additional materials for the Disco Boogie Outfit.

This has been a crazy and hectic Friday morning! Apologies for taking so long to get this out.

I didn’t even look at the bundle today before i bought it. The bonus sales hooked me. 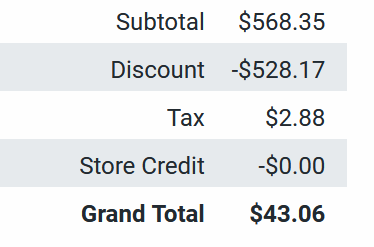 half of that is two gen 3 pro bundles (I seem to have all the gen 8 ones) so those may not count for much.

Get one Genesis 2 or 3 Pro Bundle for FREE they say, if I buy the bundle and 3 add-ons. Wonderful! Except:

I bought the curly hair. That was it. That’s all I was interested in.

I don’t normally buy medieval fantasy stuff, but I do like the substantial nature of the armor, set so I picked it up, even though the promos seem to have the feet imbedded in the ground in some images.

I also really love Shana’s Soulmate texturing. So, I did pick up the Boogie Woogie outfit. Yes, don’t judge me.

I don’t need more giants. they are well represented in my runtime anyway, so no bundle for me. I do find it odd that they inserted a voodoo bundle in between the Jazz releases.

Let us know how the armor turns out. I was interested but the supplied shots make it look a bit like silver painted plastic rather than real metal (although I suppose you could swap shaders).

I’m puzzled by the armor, simply because it looks like he’s wearing two different outfits: the full plate armor on his legs says “wealthy knight”, the mail shirt and leather jack on his torso says “decently-equipped man-at-arms”. The mail shirt should probably also come to mid-thigh rather than stopping somewhere around his navel. The helmet and coif are pretty good, although in combination they again suggest a footsoldier rather than anyone who could afford those leg pieces or vambraces. And he appears to be holding his shield upside down.

I am not an expert on medieval armor, but based on what little I know, that just looks … really weird. I dunno, maybe he looted the legpieces from a fully-armored knight he unhorsed, and his buddies got the rest of the outfit. Certainly, having soldiers equipped piecemeal is plausible enough. Still, it’s odd. The lack of detail on the jack when everything else is so carefully modeled is also strange.

I like the Sixus giant, but the problem I always have with Sixus is the texturing. Sixus is a brilliant modeler, but there’s something about the ridged and pitted skin that their figures always have that never looks right to me. I can’t tell if it’s part of the mesh, or if it’s a displacement or bump map. If it’s the latter, it should be possible to dial it back a bit which, in my eyes, might be an improvement.

I like the knight outfit, but no it isn’t accurate and not without flaws. You will have to be careful posing the figure, because more energetic and comic-book poses just look strange, and there is a fair amount of bulk to allow clipping. The texture of the jerkin is a bit rubbery, but the leg armor is okay. Given that knights often were not super wealthy I’m okay with the piecemeal nature of the suit. But I think the lack of authenticity has more to do with not wanting to model more complex pieces. So there is no tabard or anything that might flow over. I do think he should have some heraldic markings on his tunic. The coif of mail would’ve been awesome if it could be lowered but there is no such morph. The tunic of mail is part of the shirt, and you can’t conceal it.

This howls for a texture expansion by a good texture maker. 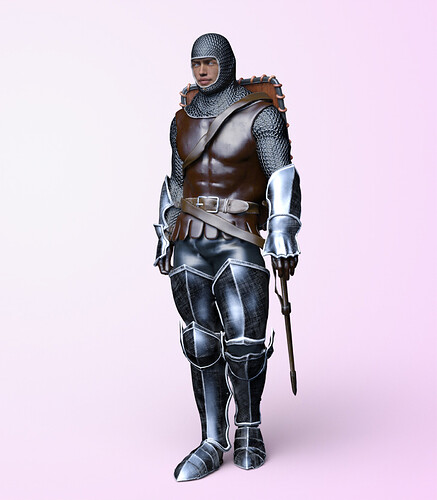 MJC is correct there is a bit of a Dirk the Daring vibe from the helmet. (which I left off)

MJC is correct there is a bit of a Dirk the Daring vibe from the helmet. (which I left off)

It took me forever this morning to remember Dirk the Daring because I kept on typing out Dirk Diggler. I was like, “That can’t be right!” and when I Googled it and got results for Boogie Nights (A) it all made sense, and (B) I’m so glad I didn’t publish that.

And then I turned on Dragon’s Legend from Koto and turned the volume way up!