My Latest Male Character, Could Really Use Some Feedback

Okay, I don’t have a name for this guy yet but I have his base textures down. I’m still not sure about his groin area as it doesn’t look quite right to me. This is L’Homme in Poser 12. Any and all constructive critique is VERY welcome. I know he needs work, I just need to know where to begin! Thanks! 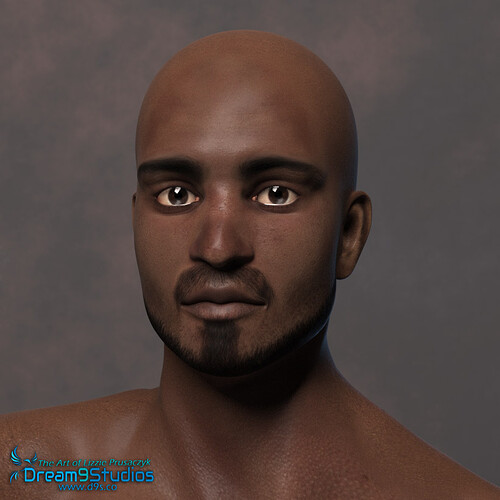 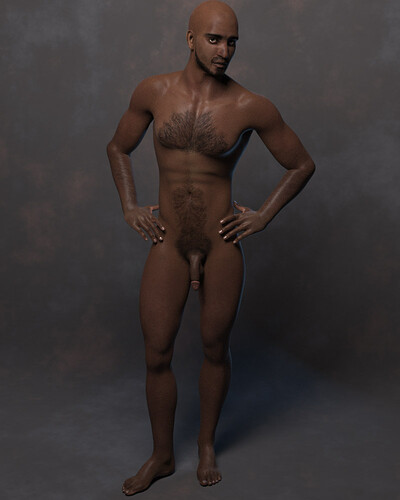 Well I mean if you insist on someone staring at a naked man I guessssss I can do it. It’s such a demanding thing…

Not that I would enjoy that or anything lol.

Ok first I want to say he’s really good looking. I like his features a lot and think he has a good face and I really like his facial hair and the body hair you have on him as well. And those eyes…I can’t quit staring at them. So good.

I see just a few things that might help a little. I don’t know if it’s the lighting or not, but his chest seems a little proportioned oddly compared to how flat and smooth the rest of his body is. I think his body looks great. and it may just be the way the way that light is hitting the underneath of the chest as well. Now on too the Man Meat. You are right it does seem a little off. I think it looks a little flat. I think if you gave him a little more girth vertically on the shaft…you know just plump it up just a smidge it would probably help, and it could just be the way it’s hanging at the base too just needs to be rounder. I would fool around with that area as I think that is where the issue is really.

That’s all I see really just little tweaks, and a lot of that could just be the way the light is hitting things too so, you know how it is. Great job though he looks great.

Thank you! I’m so glad you like the facial and body hair as I was nervous about that too. I actually hand painted all that myself onto the textures rather than using a pre-made merchant resource. I painted the eyes too using a brush kit and layer styles.

I’ll “fool around with that area” some more as you suggest and see what I can do.

Thank you for your critique and suggestions. They are VERY helpful! You’ve given me ideas on how to improve and built up on confidence on what I did right.

All in all I think he’s a really good looking character.

I’m really hoping they rework the entire mesh for L’Homme’s genitals and add some decent morphs. It just doesn’t… function or map well.

I loved the overall look of him to put him in my cart. Tight month so I’ll probably have to wait a teenie bit longer.

I don’t usually buy skins much any more since I do my own thing (RAMWorks/RAMWolff here) and I love L’Homme but of course I’m waiting for Chris to send me Dusk 2 with a basic rigging set up.

I don’t buy female characters very often but male characters can often catch my eye if the head morph is pleasing and realistic enough. For body types I’ve tended to stick with using mostly the Full Body Morphs to shape the body as it’s easier to create a morph that clothing will be easier to fit too using the Copy Morphs From tool in Poser!

In any case, nice work there!