This is a super NSFW tutorial on how I brought my Karl character from DAZ Studio over into Blender. It’s NSFW because Karl is effectively an android gigolo (“hustler”, “rent boy”, “male prostitute”, etc.)

We’re going to take all that and bring it on into Blender using Diffiemorphic’s DAZ Importer Script.

And since I absolutely hate YouTube video tutorials, I’m putting this together in case you hate those videos just as much as I do.

Before we begin, you may want to familiarize yourself with my DAZ Studio to Blender by way of Diffiemorphic post for an introduction to Diffiemorphic’s add-on and how to install it.

Update: 2021-11-08 – I had to revise the instructions below to correct an issue that was preventing Dicktator from being posable. Unfortunately the problem is introduced as soon as you go to import the DAZ Figure into Blender in the very beginning. Which sucks.

So that’s it. Hope you found this useful.

Next tutorial I’ll go into posing.

But if you want a quick head start, just select the armature and use the drop-down in the top-left of the 3D workspace and switch from “Object Mode” to “Pose Mode”.

I’m stopping the tutorial here because I’m having an issue with one of Dicktator’s bones (shaft1) is refusing to rotate and I’m trying to see if it’s a problem with Blender3 or not so I’m going to reproduce all this with Blender 2.93.

I love all these tutorials, they have really just been a great way to learn and easy to call back to when needed. I look forward to trying this.

Thanks for the feedback. Just an FYI though I had to make some moderate-level changes to the instructions above so if you’ve started down the path know that some things have changed.

Welcome aboard @kernwell! Did you get it going?

If you don’t see the result on your character when moving the slider in morph, go to “global setting (DAZ importer)” in “morph” change values 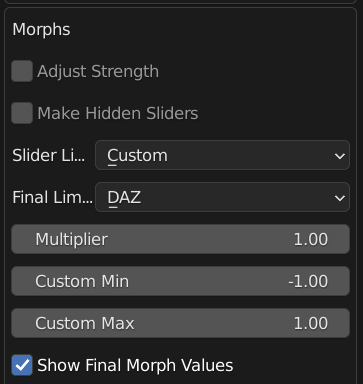 One of these days! I got a little side-tracked.

Thanks for the tutorials!! very helpful for dummies like to me to get it working haha Any chance there can be more tutorials on other use cases e.g. custom clothing / animation?

Glad you found it helpful. Unfortunately real-life has taken a front-seat to some of my more artistic pursuits.

Can’t speak for the animation as I don’t do much animation.

The clothing is something that’s on my agenda. Key thing there is to bring the clothing in with the rig then merge the rigs.

Also, Diffeo has been improved a great deal since I first wrote this. A lot of things are much easier and simpler now too.

Last, and certainly not least, welcome to U3DF!

Thanks for the warm welcome! aww hope you can have more time soon to come back to the artistic stuff!

Hi I have several tutorials on animating G8 Characters in Blender via Diffeo. Thanks!! I have come across your channel’s other videos but didn’t realize you have tutorials! this is super useful ^^ already subscribed and liked!

Great tutorial…thanks. I was pounding the Youtube pavement for hours trying to find a way to get dicktator to rig…and sadly, I still get get it to work. So many NSFW tuts on the daz to blender conversion but 90% are about women. Found this little gem on SmutBase: SmutBase • Male Ultimate 1.06 (Ultimate male 1.06 Daz model to Blender) now if I could just snatch that rig and use it on all my Daz male characters I would be a very happy camper.

Hi @Axel-Wilde! Welcome, and nice to see you over here.

When are you going to post some more art?

I know if you use the Rigify rig you will lose the rigging for Dicktator. You can still turn it back on through the property layers in Diffeo.

The other thing to remember is to Make All Bones Poseable. You will have problems with Dicktator if you don’t enable that.

Yeah did your tutorial to the letter and made all bones poseable…needs more research I guess. I seem to spend half my waking moments now looking for tutorials. Art has taken a bit of a back burner while I get in touch with my Blender side. Really want to go down the animation route now…stills just aren’t doing it for me anymore. Thanks to @Dhulquarnain, he made me buy iClone as well (well, he lead me down the road) …so any spare time I’m just learning, learning, learning. Looking forward to participating in the conversations on here, now that I have been pretty much expelled from Daz forums from mentioning things I wasn’t supposed to. Great site btw! Hope all well with you.