Hi! I Was going to send an email with these questions but thought everyone might benefit if they were thinking of buying the products I am interested in.

Q1: Is the body hair for your G8M Anders character part of the skin or seperate? If it is separate, is it fibermesh that can be applied to any character or would he have to have Ander’s shape?

Q2: I don’t have any G3 characters so I can’t experiment with this. I know that you can use G3 maps on G8 characters, but is it as easy as applying the skin or do you have to apply each channel separately? I was interested in several of the older G3 characters you offer, but I hate going between editions and try to avoid extra work. Ideally I’d like to load a G8 and just apply the texture of one of your G3s (I really like the elemental-themed character skins) – is that possible?

Thank you for answering these as I like to know some details before I buy to avoid issues later on – not that E&J have ever given me a problem, in fact they are one of the best creators I’ve bought from.

I post the link to EJ Anders here so there is no confusion with another character: 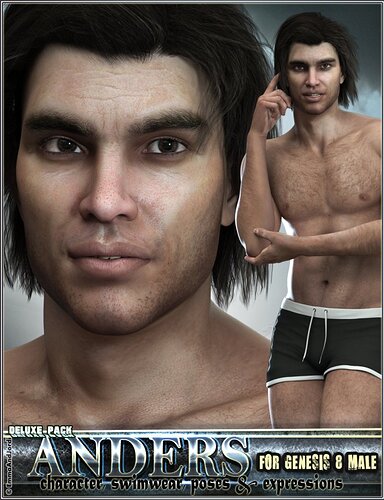 EJ Anders Deluxe Pack contains: a detailed character for Genesis 8 Male, an extremely versatile swimwear with lots of partial materials, 10 poses with all their partial poses, and 10 expressions for full face, lower face or upper face, and their...

Q1: It is hair on the texture. The only character in which we used some kind of fibers is EJ Argos, and only for the beard and hair: 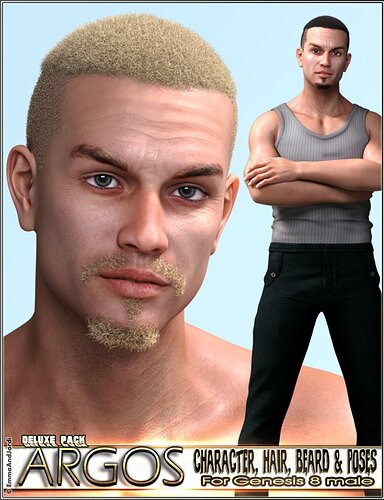 EJ Argos Deluxe Pack includes a character, hair and beard (hair, soul patch, goatee, mustache), tattoos, and 10 full body poses with their partials.EJ ARGOS EJ Argos is a character that can look in many different ways, but always experienced and with...

The reason we had to not do much on fibermesh is that it is actually something of ZBrush and you can export it as an obj and put it into a character, but not all computers will handle it good. In order to make the products as much compatible with older hardware, we consciously never used things that use too much resources. So no, you can’t use it on another character, because the skin of Anders has those hairs painted on the skin.

Q2: You can load G3 skins on G8 characters. It is just applying the skin with the icons provided. The morphs can’t be used, though. But the materials can.

Thank you so much for your support and appreciation, Hexdrake, we appreciate it very much!

That is good news and bad. I really like Ander’s hair, but I am not sure about the close-up potential. I was looking for some good body hair similar to his, but something I could apply to any skin. If you happen to know of a good model to get this with, please let me know.

As far as the G3 skins, that is great news! For those of you who haven’t taken a good look in E&J’s product library, there are some great G3 models with unique skins (like the Fire Goddess and Mother Earth models). They are not just another color, they look like they have various texture differences (you guys can correct me if I’m wrong) like patterns and such. I had already bought quite a few of E&J products, but had plenty of characters and hair so I didn’t really look at the options closely, but after going through everything while waiting on a 3-hour render, I have a new wishlist of 20 or so items.

Are you guys going towards more Zbrush stuff? I noticed you haven’t released any Daz stuff recently.

PS…Juncul’s skin at .46 with a little brown looks great as dwarf skin. The ruddiness works perfect!

I’ll try to remember to post my final renders of the dwarf character I’m working on if I get a chance.

In closeup, Anders looks as you see in the promo. The promos have little or no postwork as you may have noticed, apart from minor corrections on light or color. The purpose is that the customer actually sees what they get. We never did post work because we never wanted to fool the customers. It’s very deceiving when you buy a product and when you render it, it doesn’t look at all like in the promos. We always thought as customers before than as a vendor.

All the skins are different, we changed them in every character. Because it’s also fooling the customers to use the same skin over and over and just change the makeups.

Thank you so much for what you say. Along the years seeing that people make good renders, have fun and enjoy the products has motivated us and made us happy. 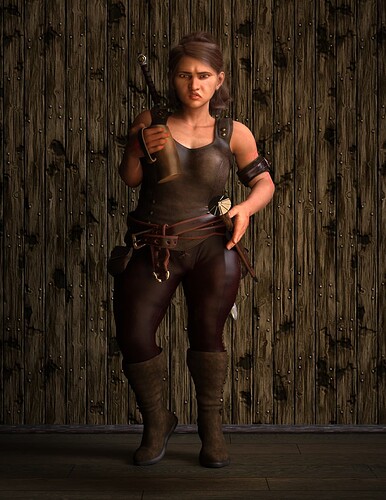 Here is the dwarf I spoke of. She has Junnal’s skin along with a little brown, .46 trans, and some orange tavern light. I can’t say enough about the skin of the three G8s I’ve bought so far.

(do you mean Juncal?)

Thank you. Yes, apologies on misspelling. I transpose characters in about every other sentence and don’t always catch myself.

Great! I didn’t know if it was our character skin, it looks great on her too!