An Unfortunate Series of Events 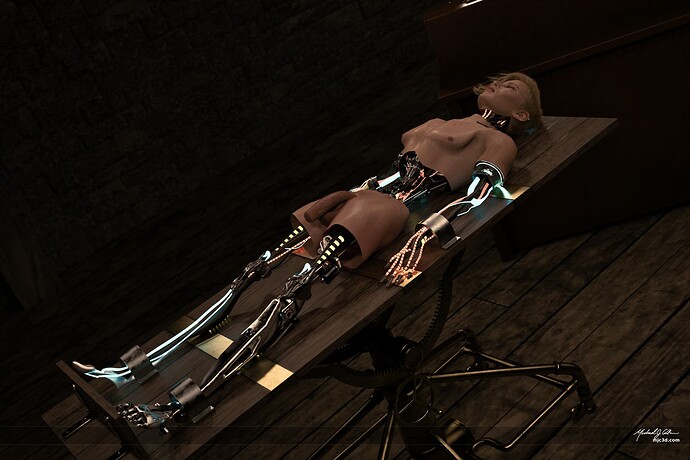 Source: An Unfortunate Series of Events

What happens when an intrepid parallel-world traveling android from the present-future ends up in the wrong time-zone… Ethan may have bitten-off more than he can chew. Or maybe I just like using hyphens?

The premise for this one was simple. I wanted to do a render of Ethan’s inner-body. I kitbashed together DireWorks’ CyBody (Renderosity), Cyborg Generation 8 (DAZ3D), as well as PixelSploiting’s Plugin Limbs (DeviantArt). Genitals is Dicktator + Cover Up (foreskin) by Meipe (Renderotica).

The set/ environment is Mad Scientist Lab (DAZ3D). Emissives have been tweaked and turned down to realistic values, with the Exposure Value set to 4.0. See my other posts about Ethan to see what went into the figure.

Extra steps had to be taken with some of the anatomy from the Cyborg Generation 8 figure. After being auto-fit to Ethan’s body there were still severl significant pokethrus of the cyborg endoskeleton through Ethan’s skin requiring using the Geometry Editor tool to select the offending faces and then switching over to the Mesh Grabber tool to actually push the geometry poking-thru back under the skin.

So as I was putting this together a bit of a backstory started to form. Ethan is the principle character in a story I’m working on that has traveled through a portal from a parallel universe. Turns out scientists at CERN have been using the Large Hadron Collider to generate gravitons and haven’t successfully generated any. Except they have. Been generating gravitons. A lot of them. And those gravitons have been impacting Ethan’s world and wreaking havoc.

Ethan volunteered to travel through the portal the scientists in his World had successfully created because it wasn’t known if the journey would kill a human. Ethan, as we see, is an android so would otherwise be unaffected.

Astute readers will begin to question some of what I’ve just written. A parallel world does not mean time-travel. So how can a society be so advanced to develop and have fully sentient androids? To understand that you would need to understand that on Ethan’s World a race of alien space explorers crash landed on Earth in the year 256 AD, right smack dab in the middle of the Roman Empire. Fortunately for Earth, the aliens were pretty chill and didn’t follow any pesky “Prime Directives”. They shared their knowledge and technology with the planet.

But more importantly Christianity never had a chance to gain a stronghold. Pagan religions ended up dying out too. Humanity suddenly learned the scientific basis behind what was going on our planet and didn’t need to rely on dogma and superstition. So there were no “Dark Ages”. No Inquisitions. The Renaissance never happened because the age of enlightment never really died out.

Mankind’s achievements now not stymied by religion and dogma had a chance to start much earlier than it did in our Universe. The Puritans never settled in America. The indigenous people of North America and Canada embraced technology while at the same time paying homage and respect to the planet and all that inhabit her.